I backed the Kingdom Death: Monster kickstarter thirty seven years ago like the rest of you. I was elated when the game arrived, I dove in face first.

Then the expansions arrived - EVEN MORE ELATION! Spidicules, Dung Beetle Knight, The Dragon King, you name it. I picked up every game expansion in the kickstarter except the Lonely Tree. (I have a thing against paying money for tiny plastic trees. 40k did it. Malifaux did it. Both terrible, overpriced, and crap. I assumed I would feel the same about the Lonely Tree)

So I had a giant game box, and an even more giant (three times the volume) box full of expansions to cram inside. Grab your foamcore and cue the music!

This isn't a how-to. This isn't a tutorial. This is a series of photos to show you how I decided to organize the KD:M box, with all expansions. No models. These models deserve to be on a display shelf. If you put them in a box, you're crazy, and wrong. Back to the box. I love this game, very much. So I decided to pour some time and energy into box management.

Under the lid: top layer holds rule books, player gear grids, and the largest Sunstalker map pieces. I had the core rulebook and the collection of expansion booklets spiral bound. These all rest on the game board. 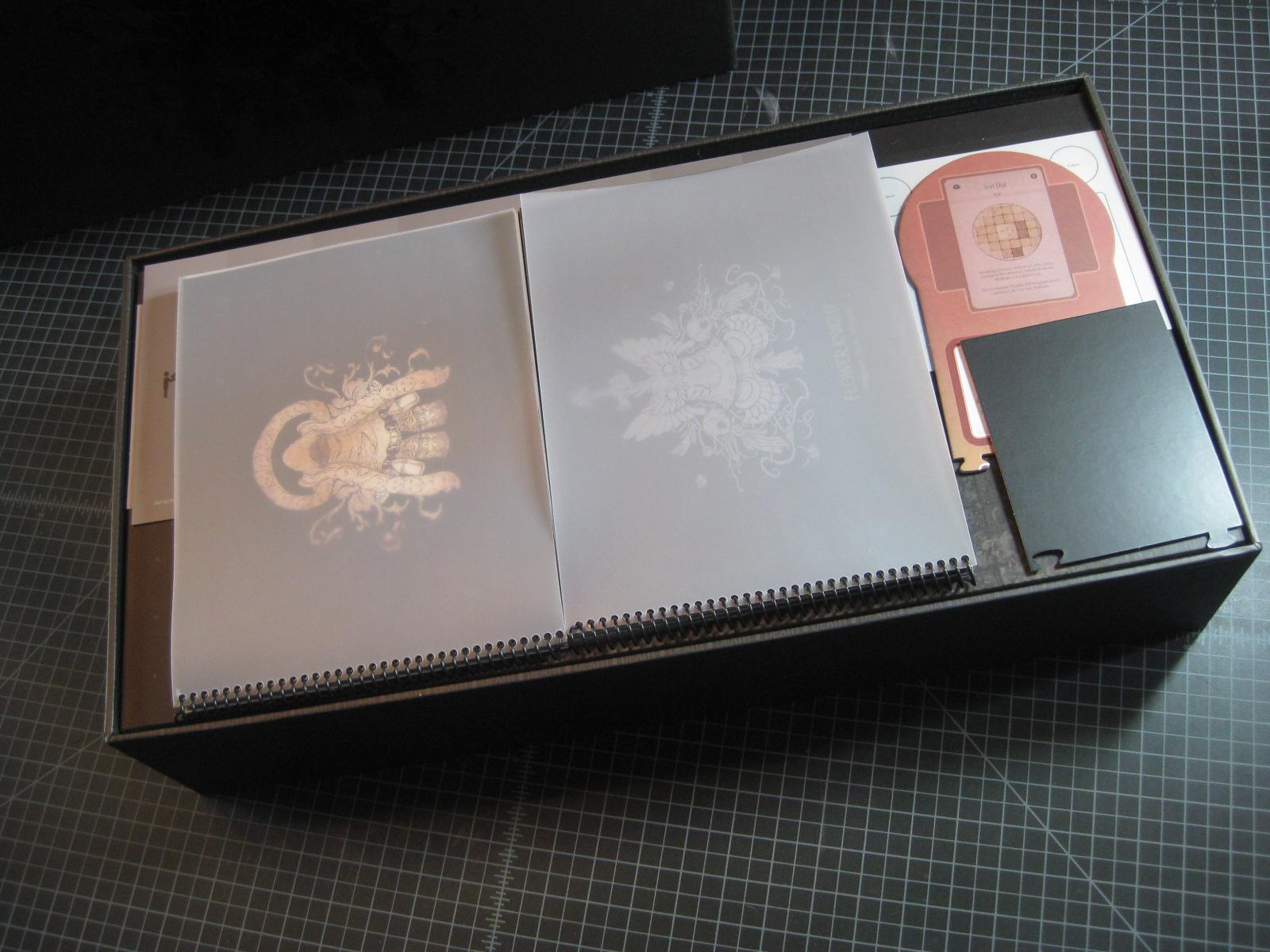 Under the game board, the magic starts to unfold. Cards - AI decks, HL decks, etc.
On the right side are the settlement cards and stacks of photocopied, enlarged character and settlement sheets. Yes, every single card is sleeved. Yes, I spent more on sleeves than the cost of most board games. I regret nothing. 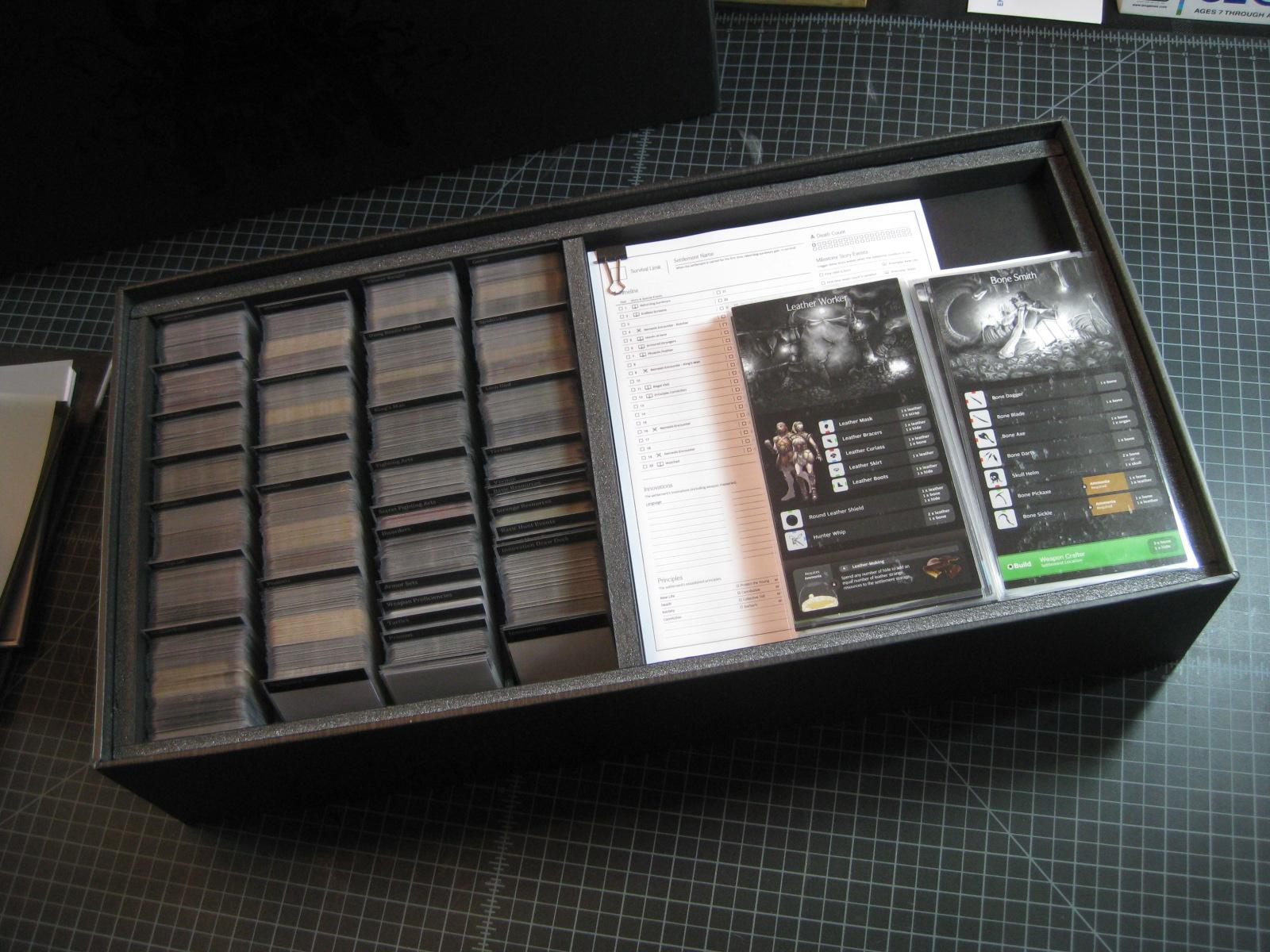 Under those settlement cards and tracking sheets, a removable layer of 1/2" foamcore, hiding yet more secrets... 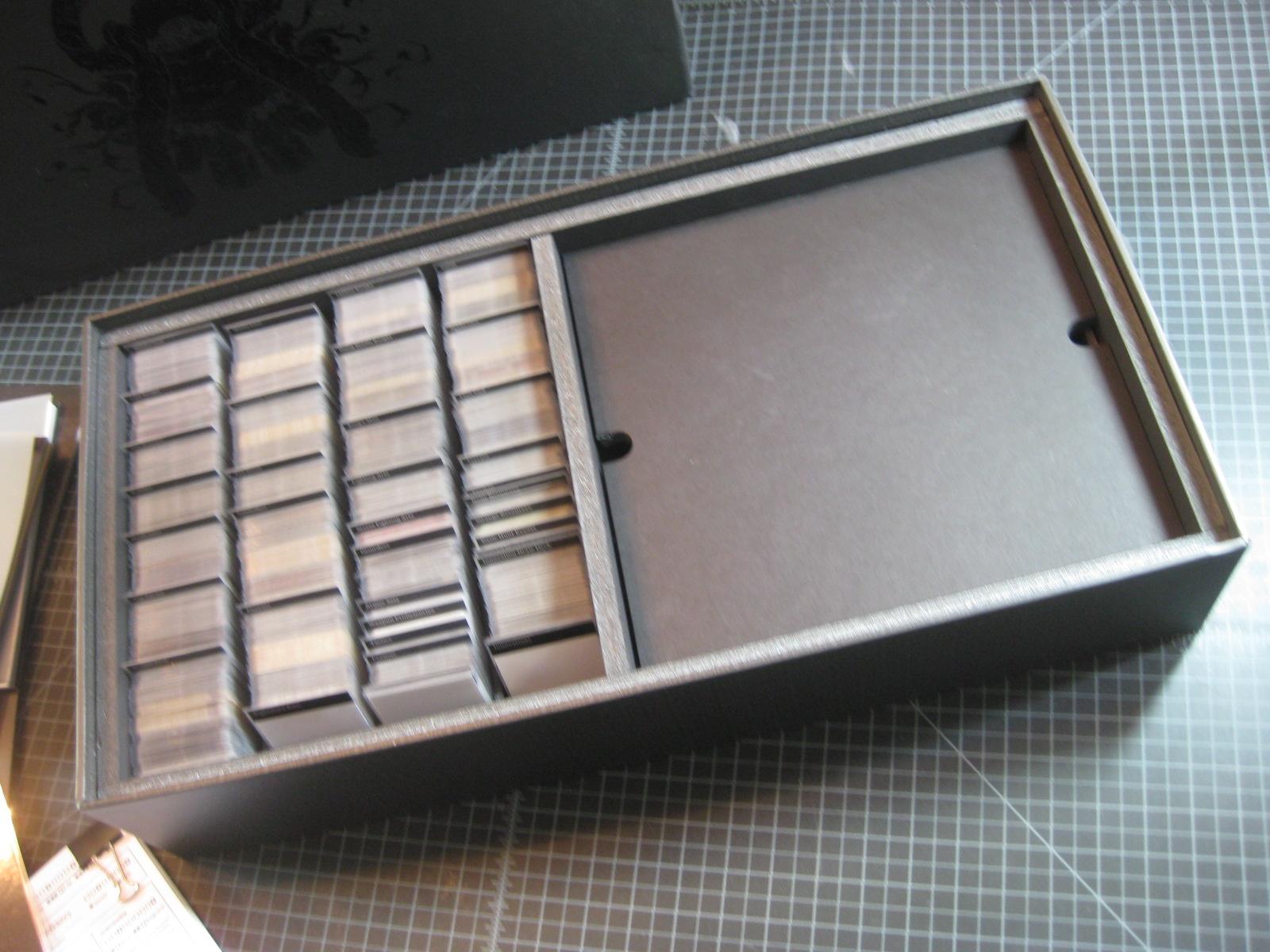 Pull that layer, and bathe in the majesty! Gear cards, and the token tray. Lining the tray with red felt was not originally my idea. A few folks have done that, and I think it looks amazing. 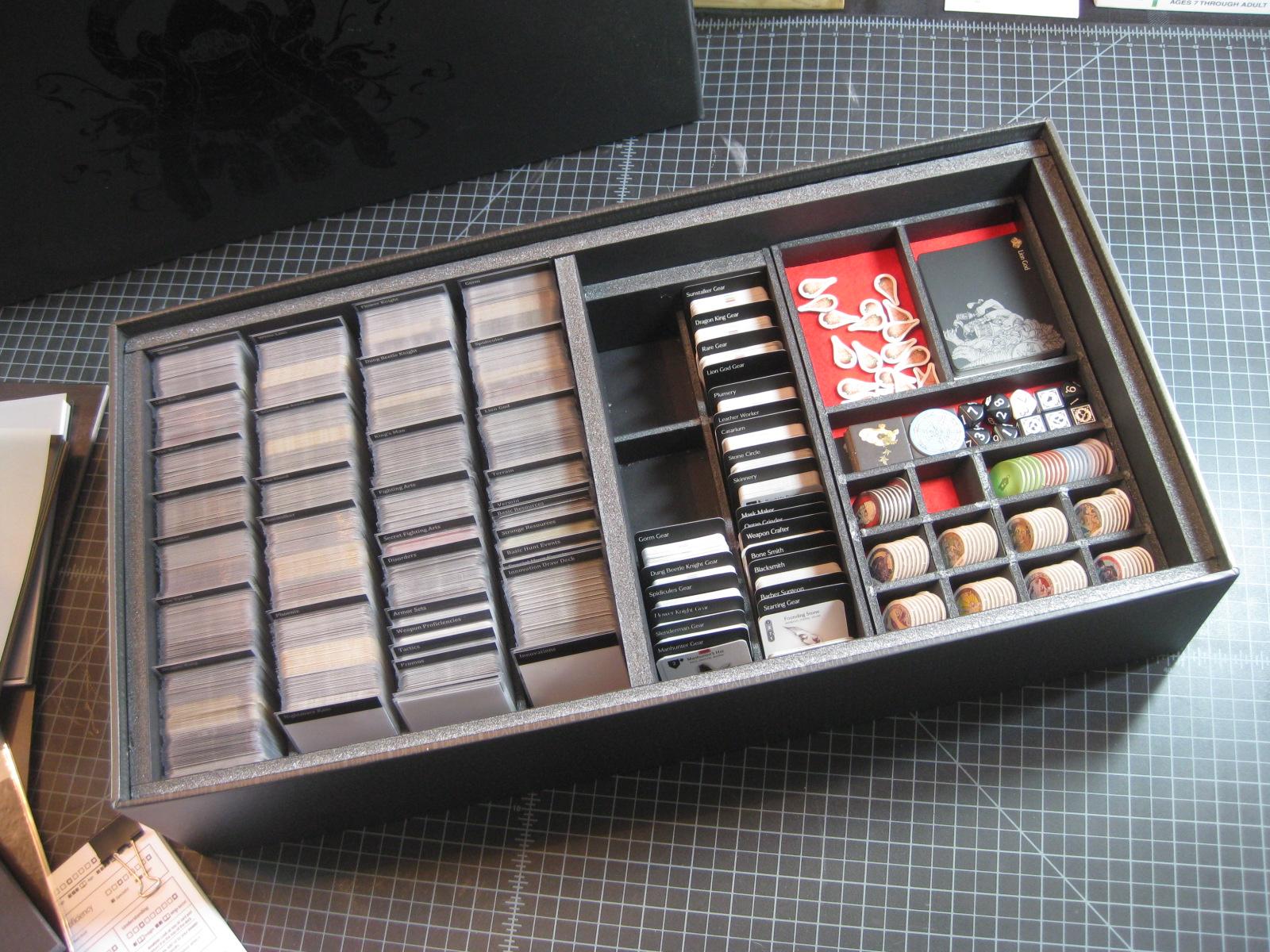 You're probably asking yourself: Can this get any better? And the answer is: Maybe! 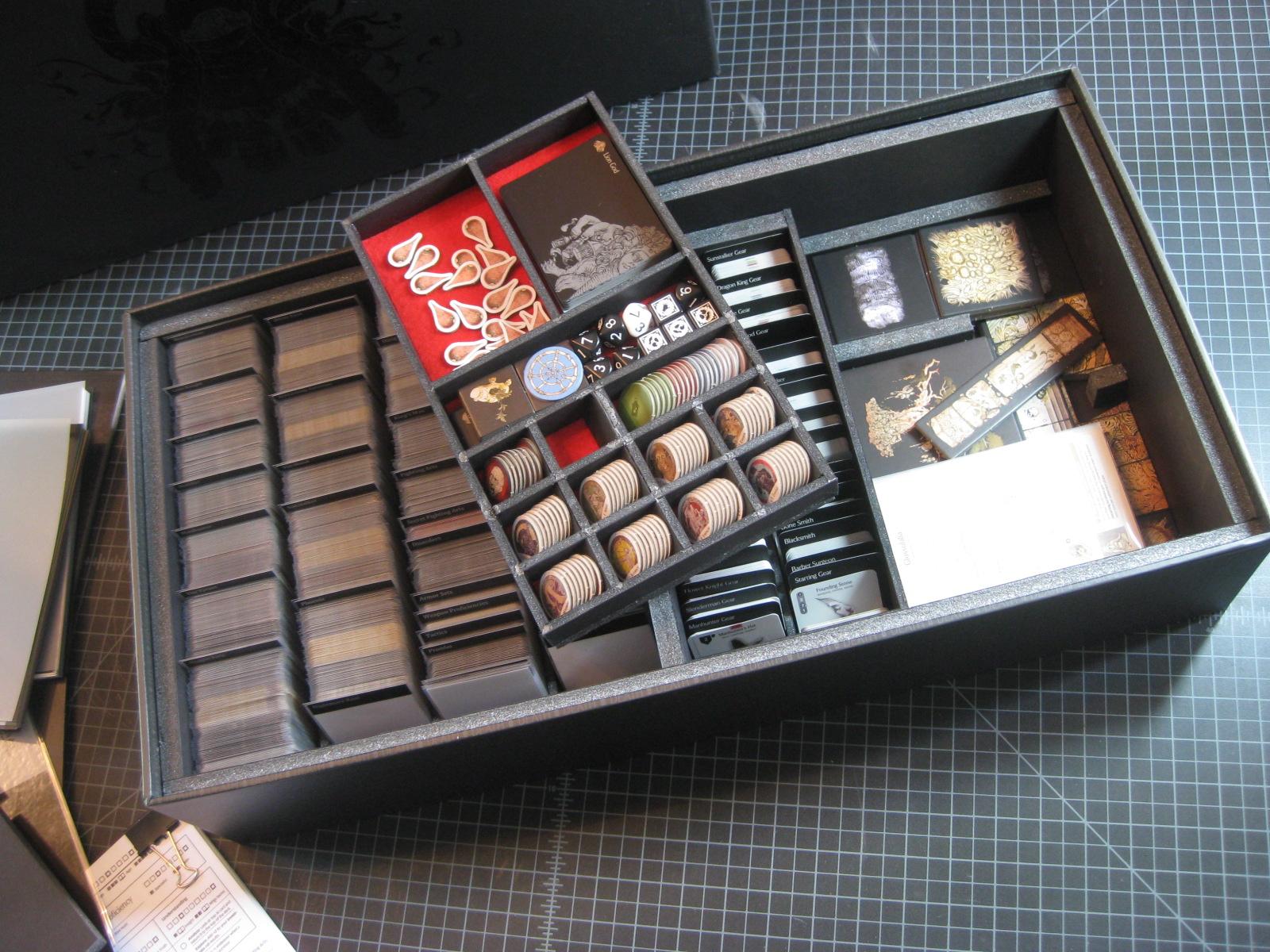 The token tray is removable, so you can keep it close during the hunt and showdown phases. It holds the most common showdown items: stat tokens, dice, bleeding tokens, resource cards, with space for the current innovation deck, or whatever other card stacks you want to keep separate from cold storage. 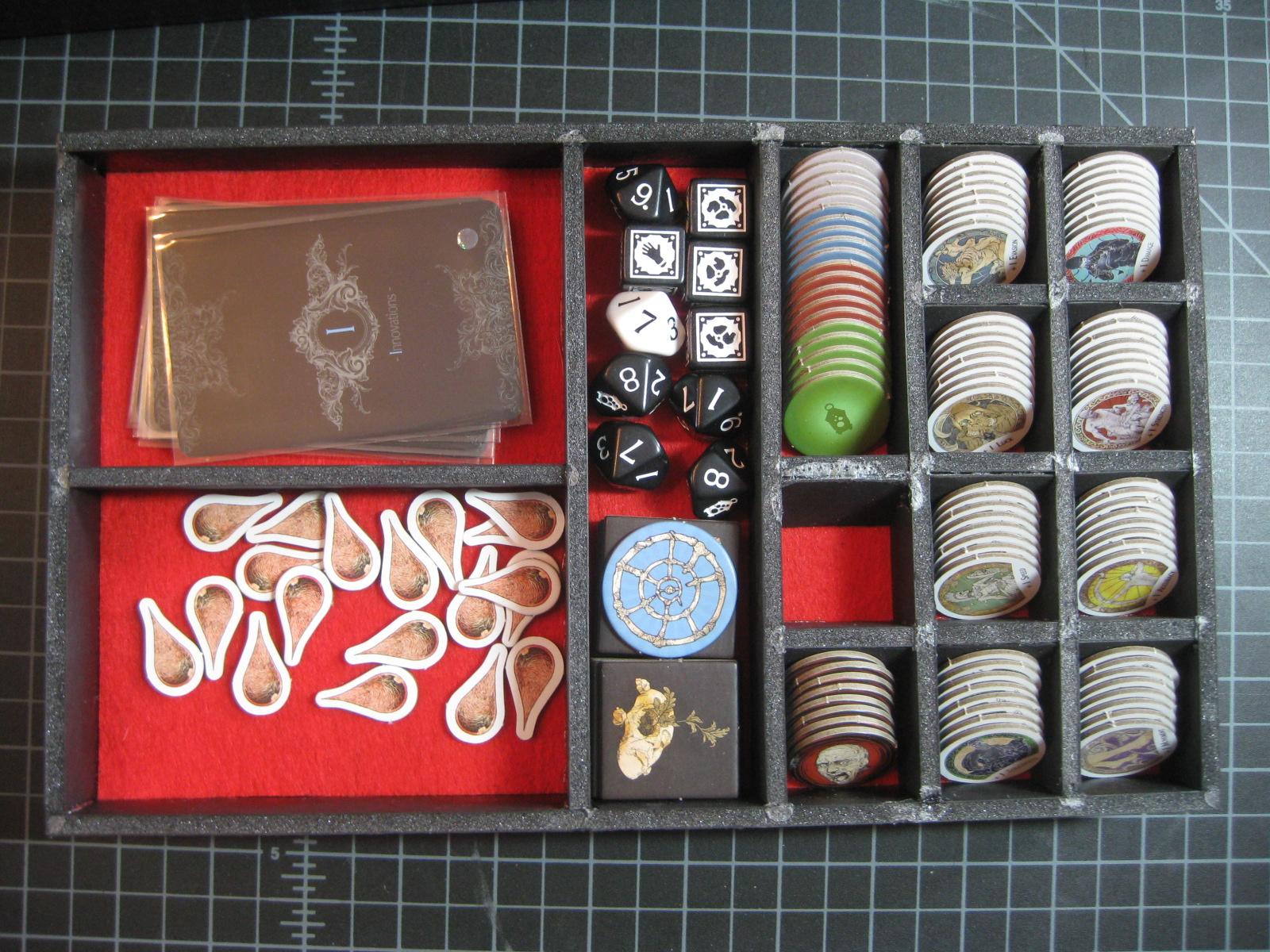 Token storage seems to be a bugbear in the Deathiverse. Lots of custom KD:M box management I've seen stores the tokens upright, and you can't differentiate the faces. I built small compartments for each token, and stuck a steep wedge along one side of each. This holds the tokens at a slight angle, allowing you to see the token face at a glance. This makes it easier to find the +Str or +Speed quickly. It's a small touch, but it makes a big difference. Under the token tray you find all the different terrain tiles. Fallen pillars, Lion Knight stage, they're all in there. 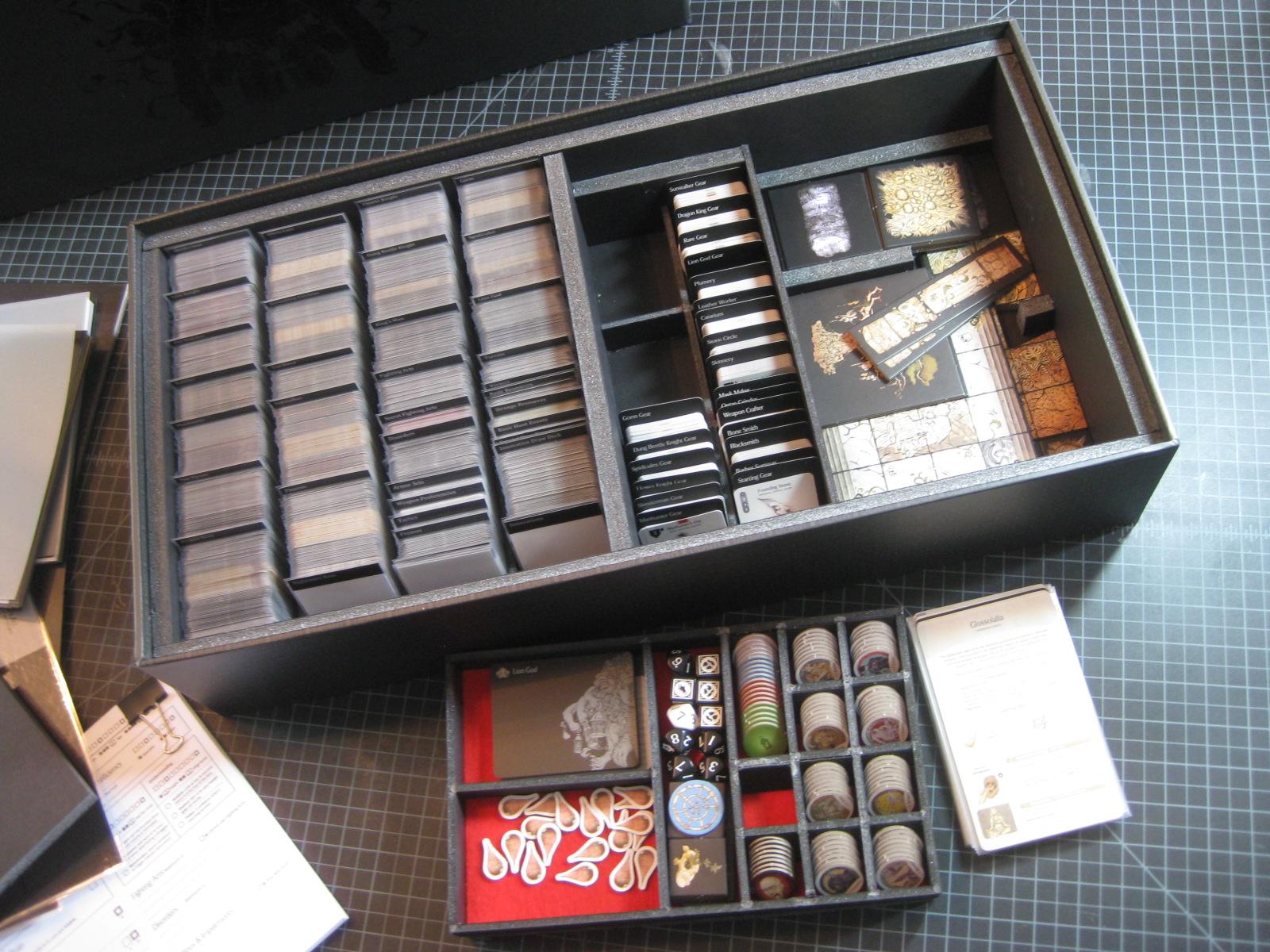 One last bit: Card Dividers. Brace yourself. For the gear cards, I cut the dividers down to a more reasonable height. Why were these dividers so tall to begin with?


I'm storing the gameplay decks vertically, which means I needed completely new dividers. I found a pdf for custom vertical dividers, printed them on card stock, cut them up, and had them all laminated.

So there you have it. If you scroll through the images backwards, you can simulate packing this beast back up. I also weighed the box, it currently stands at 26.4 pounds. Yup. This game now weighs more than a small toddler.

I used primarily 1/2" and 3/16" black foamcore. There's also a few linear miles of hot glue, and some red felt. At some point I'll finish the foamcore edges with plastic strips, but for now I just want to PLAY THIS GAME. So good. So very, very, painfully, uncomfortably, scarily, creepily good.